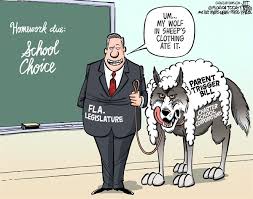 Despite a bruising defeat in the 2012 Florida Legislative session, parent trigger is something proponents are too stubborn to drop. Anointed 2013 sponsors Rep. Carlos Trujillo and Sen. Kelli Stargel, struggling to re-position their brand say, “We want to give parents a seat at the table.”

Thanks, but no thanks. Parent trigger uses parents like a stack of cheap dinner napkins. It “empowers” us to do the grunt work then mutes our voice. Parents are expected to blindly pull the trigger without any guarantees and transfer a valuable public asset to for-profit charter chain investors — the very folks who funded the creation of parent trigger in the first place.

Every Florida parent, regardless of socioeconomic status, has the legal power right now to set the table thanks to public School Advisory Councils (SAC). Before Florida politicians got dollar signs in their eyes over privatizing public education, they created SAC, a collaborative legal framework that helps parents, teachers and school districts address issues facing any school. It is in this context that struggling schools are turned around each year across Florida with very little fanfare, just a lot of hard dedicated work.

Why resurrect a parent trigger that Florida parents don’t want or need? Loss comes hard to folks who think they own the winners circle. It’s hard to justify a $2 million marketing campaign getting smoked by a handful of senators and hundreds of thousands of pesky Florida parents who refused to back down and shut up about the shameful parent trigger scheme.

Florida’s political bullies are notorious for using the “assumptive close” to publicly predict victory before a bill is even filed. So, to protect egos and political capital, parent trigger is back on the ed reform lazy susan for another run.

It’s instructive to observe the committee stops for parent trigger this year. Without fail, the same lobbyists, foundations, chamber types and paid-to-witness ex-legislators stand up proclaiming their fervent need to “help” parents get a voice. Equally without fail, 20 or more authentic parents from across Florida testify in opposition against three or four paid lobbyists.

Proponents even held a press conference to dissect the “myths” about parent trigger. Where’s the news? The same well-heeled professional proponents showed up. Not one Florida parent was there. Bordering on satire, they tried to throw the Florida PTA under the bus by questioning their status as parent representatives. That’s just silly. What member of the Tallahassee press corps is buying that?

There’s no bigger waste of taxpayer time and treasure than lawmakers who refuse to respect the will of the people. No Florida parent group supports parent trigger legislation. A rock-solid alliance of nearly a million parents across the state including NAACP, Fund Education Now, League of United Latin American Citizens, Florida PTA, Florida Gifted Network, Parents Across America FL, Testing Is Not Teaching, Marions United, Support Dade Schools, 50th No More, Citizens For Strong Schools and a host of local grassroots groups stand opposed to this deceptive scheme.

The Florida School Boards Association, whose members are the elected voice of millions of voters in the state’s 67 school districts, approved a resolution opposing any parent trigger initiatives.

Empowered parents across Florida exist at every level. It’s condescending that Florida politicians don’t respect that. Our blood, sweat and love place parents legally and morally at every table where the education of our children is discussed. No politician or flawed piece of parent trigger legislation can or ever will do that.

Florida politicians need to drop the parent trigger. Stop talking about getting us a seat at a table that we already own lock, stock and barrel. Empowered Florida parents are doing the more important everyday real work of deciding what is right for our children from inside our public neighborhood schools.