The politics of extreme ideology has turned Florida Public Education into a testing factory.  Unwilling to accept any responsibility for hyper-testing, politicians and reformers blame school districts.  A prominent education reformer recently told the press, “They really need to look inward,” insinuating that districts are the reason for too many tests. If our school districts had the authority to “look inward” and alter state laws they’d surely bring a swift end to Florida’s shameful era of testing abuse.

The Florida Legislature alone is responsible for the statewide public backlash against the expensive and often high-stakes tests plaguing our children.  They built Florida’s flawed A-F School Accountability scheme by passing a hodgepodge of laws meant to discredit public education in favor of for profit charters and private school vouchers.  Thanks to these politicians, many districts are testing 80 out of 180 school days to satisfy a state manufactured hunger for data.

District testing calendars reveal that in addition to the new Florida State Assessments (FSA) there are months of state required benchmark, formative and progress monitoring tests.  In certain schools designated as low performing the state requires twelve additional tests per student which means three each in reading, writing, mathematics and science.  Testing windows can be weeks in length and are often expanded by make-up weeks.  The result is a profound loss of classroom instruction time made worse by repeated interruptions as students are pulled for make-up testing.

All of this is required and imposed on school districts, teachers and our children by the state of Florida. In 2011 Governor Scott made a media show of signing SB 736 thereby triggering this spring’s avalanche of thousands of new unfunded state required end of course exams for every K-12 subject. Even Kindergartners will face seven high stakes tests.

Assessments are no longer helpful diagnostic tools.  The state has monetized testing to create a sort of transactional political currency.  More testing means even more data which is used for political cover to justify spending enormous sums on testing vendors, test prep, test security and remediation.

The past 15 years foreshadows how Florida will continue to use data to hurt, sort and label children, deny diplomas, punish teachers, and enrich vendors through manipulated outcomes.

Those who wrote and pushed Florida’s abusive testing policies must stop blaming districts. What’s the motive?  Is the state hoping that all this misery will send parents to their knees begging for the privatization of public education?

That’s naive. Parents are working to end the status quo and reclaim public education by collaborating with teachers and districts to restore the joy of learning, put testing in perspective, respect professional educators and celebrate the unique value of every child.

If you don’t like the high stakes testing mess, there’s something you should know. Politicians only respond to people who vote. Candidates have access to voter rolls. They can clearly see when and how often you vote. The best way to hold any politician accountable is to vote.  You have several days left to vote early between now and Tuesday, November 4th.

During the August primary, 82% of Florida’s nearly 12 million voters stayed home. The statewide turnout was only 17.58%. When the majority refuses to vote, all the power goes to a vocal minority. Many elected officials like it this way. They don’t want us in the 82% to vote or have a real voice.

Who likes the way Tallahassee is hurting our children and harming their public schools? Who likes unfair teacher evaluations, cuts to public education, private school voucher expansion, for profit charters, unfunded mandates, thousands of unnecessary end-of-course exams, constantly moving goals and the whole uneven playing field?  The less than 20% who vote, that’s who.

If you are in the 80% who does not vote, we need you today. Our children are stuck in a harsh system of education reform where nobody is ever good enough.  Surely 80% of Florida’s registered voters have the power to stop this.

Help each other. Learn about the candidates.  Get to the polls, drive your neighbors, make sure your entire family votes. There are 2.74 million public school children who desperately need a better way. What will you tell them on November 5th? That you “meant” to vote?

Redefine Florida. Cast your vote and give our kids a majority voice. 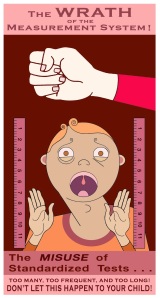 Florida politicians, Governor Scott and his appointed Board of Education expect every parent to rely on blind faith and believe that their child’s test score is true. Our children are the only people who ever see these tests. Teachers and administrators are held to a hostile and humiliating security process that screams, “we don’t trust you!” Children are forced to repeatedly sign an oath swearing not to cheat. They’re badgered not to discuss the test, even with their Moms and Dads.

No one is allowed to see the test or look at the answer sheets, so there’s no way of knowing if the score the computer spits out truly belongs to your child. Why are we wasting years of instruction time teaching to a test no one can ever see?

Parents learn whether the state views their child as a success or failure based on a test score of 1,2,3,4, or 5. For some this means the devastation of automatic grade retention, a proven drop out predictor. The state of Florida is happy to mete out a life altering catastrophic punishment to a very young child based on a single score that no one can prove is real.

Fast forward to high school and the stakes have the power to destroy lives. Students can have an A average, be accomplished musicians and community leaders, but if they don’t score a 3 or higher on the Florida Standards Assessment, they will be thrown into hours of remedial classes and lose all access to important college-related electives. Every year Florida keeps tens of thousands of students from moving into adulthood by denying high school diplomas based on a single high stakes test score that may not be real.

The Florida testing game is fixed. Goals and rules are changed on a whim. The same kids almost always score a 1 or a 2. The Florida Department of Education can predict scores before our children ever take the test. It should come as no surprise that every child’s test booklet has a bar code. The data contained on that bar code is a mini dossier of who that child is: status as a free/reduced lunch student, zip code, ESE status, race, gender, English language learner, etc.  Before ever scoring a child’s test, the computer reads this personal identifying information.

Florida has been obsessed with sorting children for years, so it follows that the tests get sorted too. Is there a link to a child’s bar code information and how well they score? Given the atmosphere of secrecy, there’s a good chance that a child who belongs to a group who is predicted to perform a certain way will end up with a score that reflects that prediction.

The Florida statutes empower Florida’s high stakes testing and accountability scheme with thousands of ways to hurt our children and harm their teachers.   Every single one of them is based on a single test score that not one of us can prove is true.

FCAT, Florida’s flawed one test, one day yardstick is gone. The new test, the Florida Standards Assessment (FSA) is not in place, but must be given this spring. Since legislators would rather have a bad test than no test, they paid vendor AIR $5.4M to slap together an assessment using recycled Utah questions. Last spring over 50% of Utah’s students, many of them high achievers, failed this test with its cumbersome on-line process and confusing questions. Now this disaster is headed our way.

Rocky transitions are standard education reform strategy. The past 15 years were a constant state of chaos meant to keep teachers, students and parents confused and afraid. Moving from FCAT to the FSA is a case in point. Instead of pausing for several years to pilot and thoughtfully implement the FSA, politicians are determined to keep in place the existing harsh sanctions against children and teachers despite the fact that this year no performance baseline for comparison exists.

Because of the unknown Utah questions, Florida students are facing a test this spring that will not reflect what they’re learning now.  Saddest of all, our littlest learners are using pencil and paper to perfect their writing skills but the test will be given on computers. How is a 4th grader with zero keyboarding or typing skills going to handle that?

In addition, thousands of new state-mandated end-of-course exams will be given this spring. Thanks to the Student Success Act (SB 736), the first bill Governor Scott signed, every single course including art, music and PE will have an end of course exam (EOC) worth as much as 30% of a student’s total grade.

Most of us accept that weighted final exams written by classroom instructors are an accepted part of high school and college. However, Florida’s new reality means kindergartners and elementary students will also be forced to take seven high stakes tests like the older students. The law uses our kids’ scores as a “gotcha” device that hurts them while labeling and sanctioning their teachers. Where’s the lesson in all of this punishment?

We know where the FSA is going.  Cut scores will be moved, dire predictions of mass failures will be made, data will be manipulated, children will lose hope and teachers will be forced to bear witness to an epic disaster.

One four letter word can make all the difference – VOTE.

It’s time for each of us to be the difference.  If Florida’s 2.74 million public school children could go to the polls they surely would.  This Monday, October 6th is the last day to register to vote in Florida’s 2014 General election.  Now is the time to check with family and friends to make sure they have a plan for voting. Show them how to register and offer to help them deliver completed forms to their Supervisor of Elections.  Know your voting status, make sure your address is correct. Absentee ballots are on their way. Make sure they are filled out and returned.

Voting keeps our democracy alive. It’s the only thing our children have.  The past four years in Tallahassee have produced seven end of course exams for every kindergartner and an explosion of thousands of expensive new high stakes tests.

Everything could be different if we all made a pledge to vote. Punitive standardized tests could be turned into helpful no-fear diagnostic tools. Top-down one-size fits all mandates could be replaced with parents, teachers and districts fighting in respectful collaboration at the local level for the success of every child.  It all rests in our hands.

We are the millions of hard working Floridians whose hopes for their children depend on a free high quality public education. If we want our tax dollars to be generously invested in providing a rich expanded curriculum that celebrates the individuality of each child, voting is the only way it will happen. Our children are watching. Who among us can say no to them? Your vote is an act of love.

Please share this post with your friends. Remind them to make a plan to vote. Help one another.

Bring one of the following photo IDs to the polls: